When I was contacted by Radio SI (Slovenia’s international service) to take part in their ‘Slovenia’s Hidden Gems’ project, I jumped at the exciting opportunity. I was chosen to try out the Velenje Underground experience, so I began counting the days till I could embark on this rather unusual culinary adventure, till the big day finally arrived.

“Good afternoon,” smiled Barbara, our tour guide from Velenje’s Šalek Valley Tourist Board. She warmly welcomed us inside Vila Bianca (Velenje’s tourist office) where we were offered some refreshments, which went down quite nicely after our one-and-a-half-hour drive northward from Ljubljana. “Welcome to Velenje, Slovenia’s youngest city—just 60 years old! We’ll now take a short tour of the city during which you’ll witness stories of the present mingled with the not-so-distant past, while working up a good appetite for your one-of-a-kind dinner experience this evening.”

I gathered a good deal of facts about the young city during that one hour, a much needed addition to my current poor state of knowledge that consisted of ‘Velenje = lake, lakeside beach, and the Pippi Longstocking Festival.’ The city was once named Titovo Velenje (or Tito’s Velenje) because of the locals’ admiration of the ex-Yugoslav leader Josip Broz Tito, who now towers over the main square in the form of a 10-metre tall statue. From the spacious main square, we walked past what I think is Velenje’s most interesting building—the cultural centre that dons a cubist coloured glass facade in the style of Mondrian, and ended the tour at the award-winning, recently redesigned riverside esplanade.

All was well and good till that point in the afternoon, but the most fascinating aspect of our experience that day was yet to unfold, and it would take place 160 metres below the ground. The charismatic Matej, with his remarkably fluent level of English, took over as tour guide from that point on. He would lead us on an intriguing expedition through the mysterious tunnels of the Velenje Coal Mining Museum toward our dinner table deep within the mine.

My husband and I joined a group of six people at the museum entrance where, under the ‘commandership’ of Matej, we were urged to step onto a barrel and introduce ourselves. Only on divulging our passwords one at a time would we be granted access to the mine! Our revelations were also rewarded by a full mug of Laško beer, which we had to down in a few seconds. As you can imagine, this entire shabang resulted in a whole lot of laughs, and we felt prepared to face our adrenaline-pumping fate.

We first entered the clothes hanging room. Here, I soon felt shivers as I caught a deep sense of the past. This is the room where the coal miners would leave their working gear to air from the sweat and dust that accumulated by the end of their toilsome day. The workers’ hardship was further highlighted by dramatic photos of their charred faces.

A more pleasant surprise awaited us as we stepped into the next room, where we were greeted with a glass of sparkling Rebula wine and a tasty amuse bouche of crispy pancetta topped with a dollop of avocado cream. We were already immersed in a mysterious aura as we savoured our culinary provisions, surrounded only by candlelight.

Sense of taste heightened due to lack of light, and belly nicely prepared for more goodies, it was time to move on. Matej gave us a helmet each and led us to the mouth of the coal mine where we took the oldest remaining elevator to clank and squeak our way down to into the… darkness?

Not as dark as I’d imagined it to be. The first part of the tunnel was well lit, but the passageways got darker as we trod on. We passed a number of mining machines including a huge monster-like drill, and in one part of the trail, we witnessed an excerpt from a typical conversation that was had among the miners, which culminated in an explosion simulation.

It took just a couple more drilling machines along the way till we reached our culinary destination. A row of chefs saluted us as we took our places at a long, beautifully decorated dining table set within a cosy, wooden-cladded section of the tunnel, which pleasantly contrasted with the industrial surroundings.

I quickly warmed up to the new scene as I savoured the starter of orange marinated deer carpaccio drizzled with a balsamic plum cream, accompanied by a Quercus rose wine. The wine’s fruit-forward qualities of raspberry, currant, and cherry went very well with this semi-sweet starter.

The soothing, creamy texture of the garlic soup that came next was so luscious. It must have been one of the best soups I’ve ever tasted in my life. I don’t know whether it was the unfamiliar setting I was in that made this soup so comforting, but it definitely tasted delicious. Even though garlic was the main ingredient, it didn’t come across as too blatant, therefore giving plenty of opportunity for the taste of the accompanying crayfish and sage to come through.

As the evening progressed, I almost forgot we were in a coal mine. The exceptional five-course meal and service provided by the Vila Herberstein chefs, coupled with selected wines from Klet Brda Winery made for a stupendous dining experience. Quite a contrast with what the poor miners had to eat back in the days.

Yet another pleasant surprise was in store, we were told. A woman dressed in proper evening wear completed with a jacket and hat from a mining officer’s uniform suddenly appeared from around the corner and began singing Bizet’s famous ‘Habanera’. Mezzo-soprano Gordana Hleb’s heartful interpretation served as an inspiring interval between the soup and the main course, which consisted of honey-coated duck breast in Porto sauce, with mashed celery tuber and candied kumquat on the side. The Krasno Pinot Noir was a perfect match for this dish due to its mature red fruit and full-bodied character.

Gordana reappeared to sing Gershwin’s ‘Summertime’. What a perfect song to calmy draw our evening to a close. This, together with a delightful dessert of vanilla mousse and brownie decorated with a strawberry puree, and finished off with a Verduc dessert wine that smelled of wild strawberry and acacia blossoms.

All good things must come to an end, as the saying goes. Otherwise, we can’t prepare ourselves for new future experiences, can we? So we stood up, satisfied, and walked back to the elevator that took us back to familiar ground, where we were offered our last wine for the night: a floral sparkling muscat. A sweet ending indeed!

I must convey my deep thanks to Barbara for patiently giving the Velenje tour in English, Matej for an unforgettable adventure, Vila Herberstein chefs for their one-of-a-kind food experience that required them to take their culinary masterpieces 160 metres below ground level, and Ksenija and Radio SI for this wonderful opportunity.

A short side note about our Velenje city tour

Our mini tour took off at our meeting point in Vila Bianca, Velenje’s tourist office, and a most beautiful one at that because it takes the form of a pleasantly restored Renaissance and Neo-Gothic style villa. Situated in the small antique part of town, just below the well-preserved medieval castle, Vila Bianca is now a curious blend of old and new that houses a delightful cafe, art gallery, and modern spaces for business functions and other events.

“Velenje was built by the people for the people,” explained Barbara, our tour guide. She further pointed out that the new quarters take up the major area of the city, with the old quarters having only accommodated 364 citizens before the Second World War. After the war, the coal mine was discovered and the city experienced a great expansion, with all the apartments, cultural buildings, and social spaces built by the locals themselves. 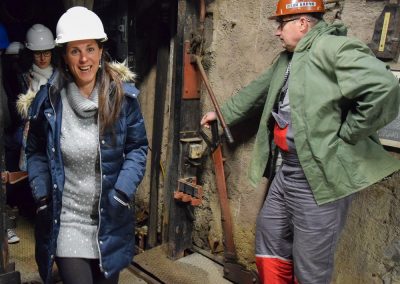 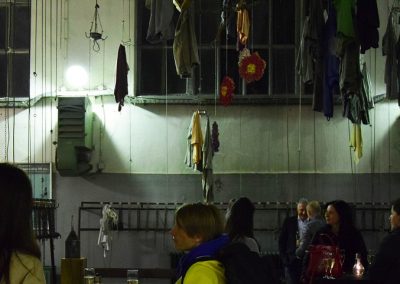 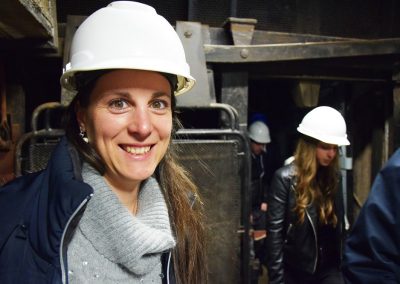 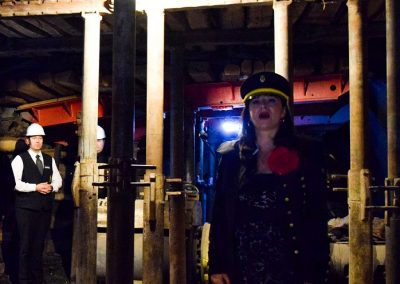 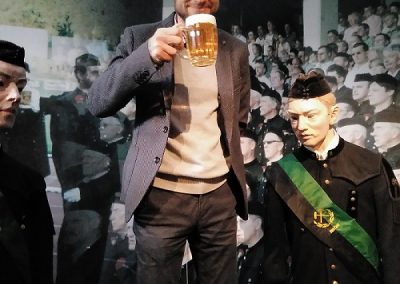 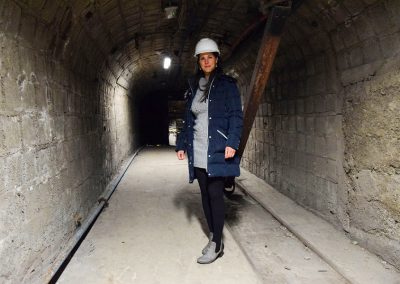 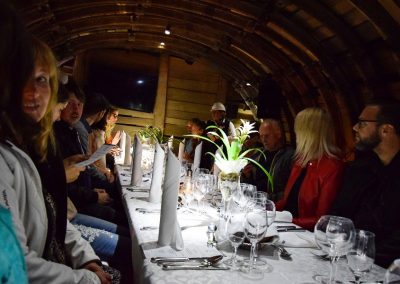 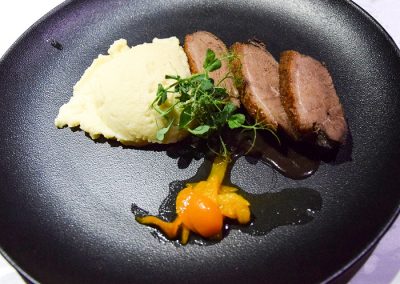 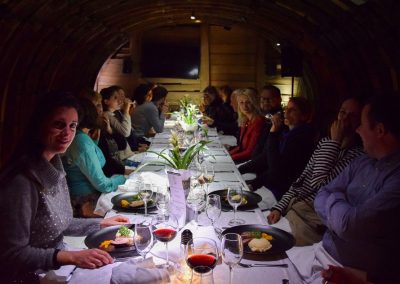 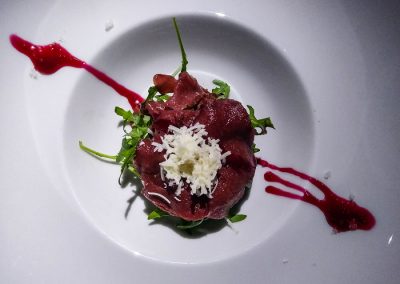 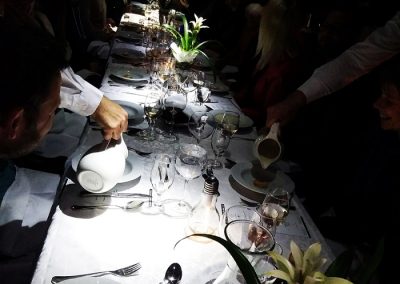